Medalcraft Mint Inc. has been a Wisconsin-based company since its founding 1948. What began as a two-man collaboration in an old blacksmith shop has evolved into a world leader in the die-struck award and custom challenge coin industry. 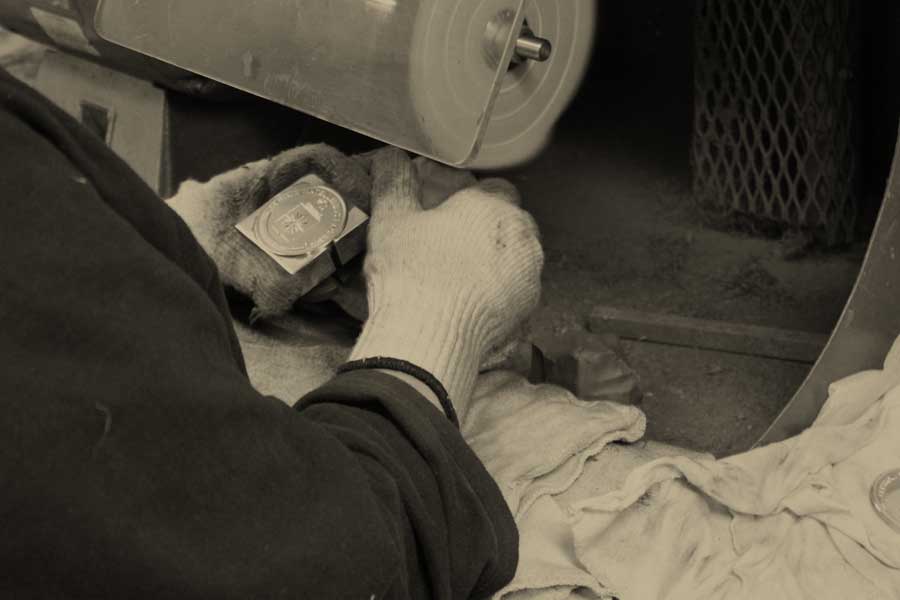 The West Shore Manufacturing Company was founded by Orlo Christensen and Gordon Thorson and based in Kewaunee, WI. An old press was purchased, and as two entrepreneurs and experimenters, they started working with “minting” medals.1948
Thorson passes away, and Tom Tadych was hired as the company’s manager. Tadych purchases half the stock from Thorson’s widow and changes the name to The Medalcraft, Inc. Shortly thereafter, Medalcraft began to supply award medals to the Wisconsin High School Music Association and other associations.1971
Medalcraft receives 1st Place Gold Award in Metal Striking through PPAI (Promotional Products Advertising Institute).1974
Christensen retires and Tadych buys remaining stock in the company. Tadych moves the company to a 4,600 sq foot building located on Gross Ave. in Green Bay, WI, about two blocks south of what is now Stadium View, now Holmgren Way. The stock line was also created and sold through the trophy dealer industry.1975

Medalcraft moved to 2660 W Mason St, which was 15,500 sq. feet.1981
Medalcraft joins the Advertising Specialty Institute, or ASI.1982
The name is changed to The Medalcraft Mint, Inc.1985
Medalcraft adds on to the building, making the square footage 32,000 sq. feet.1986
Medalcraft adds on to the building, making the square footage 32,000 sq. feet.1986
John Gregg is hired as President and Tom Tadych plays a less active role. Gregg would soon purchase the company from Tadych.1987
Medalcraft is purchased by Ron Chimenti from John Gregg.1996
Medalcraft won the contract to produce the Official Inaugural Coin for George W Bush. Medalcraft has also won 19 Gold Awards in Metal Striking over the last 27 years. Medalcraft Mint would go on to produce inaugural coins for Barack Obama and Donald J. Trump.2001
Medalcraft launches an OEM division; designing and manufacturing medals and emblems to enhance products. This includes Kohler, Zippo, Brunswick and others.2004
Jerry Moran purchases Medalcraft Mint from Ron Chimenti, and invests over $1M to increase production efficiencies, such as CNC’s to mechanically cut dies. The vision was created to not only sell a high-quality product, but at a speed no competition could beat.2007
The Government sales division is started.2009
Medalcraft expands the toolroom by purchasing a Datron CNC machine.2013
Strategic planning and action begins to significantly grow the company by 2020. The plan is to invest $1 million annually, included in that is the training and development of employees.

Medalcraft Mint is approved by the Institute of Heraldry to produce military insignia.2015

Medalcraft introduces automation to Enameling by purchasing three robots to keep our vision of selling speed to market intact.2016
Medalcraft purchases another Datron CNC machine.2017
Medalcraft puts a focused effort on gaining market share in the Corporate and Educational markets.

Copyright © 2023 The Medalcraft Mint Inc. company and its licensors. All rights reserved. All trademarks and brands are property of their respective owners.