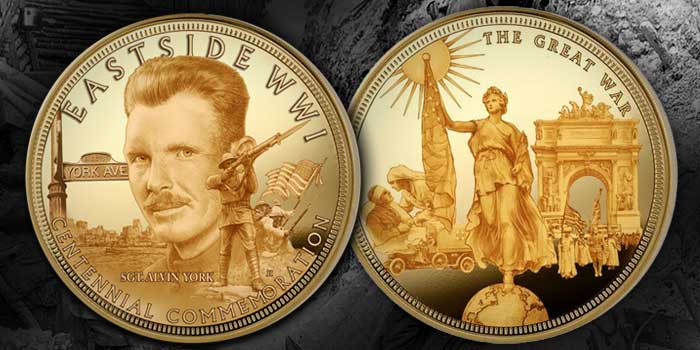 Although Medalcraft Mint Inc. has its own highly accomplished design team, occasionally we are tasked with performing only the custom medal striking for a particular project. Such was the case with a medal commissioned by the East Side (Manhattan) World War I Centennial Commission, which paid tribute to war hero Sgt. Alvin York.

Celebrated coin and medal designer Joel Iskowitz, formerly with the U.S. Mint, designed a medal that recognized the service and sacrifices of Sgt. York and other Americans in a way that reflects the ongoing impact of the Great War. The project included 100 standard bronze medals and 10 artist proof bronze medals individually numbered on the edge.

This impressive medal was digitally sculpted by Mark Peterson and measures 100 mm (3.94 in.) in diameter. The medal commemorated the centennial of Sgt. York’s heroic acts on October 8, 1918, that led General Pershing to refer to York as “the greatest civilian soldier of the war.” York received a Medal of Honor for his efforts.

York’s company was trapped behind enemy lines during the last great push of World War I in the Forest of Argonne in France. With most of his fellow soldiers killed or injured, York advanced virtually alone toward a German machine gun nest and eventually silenced 35 machine guns, killed at least 25 German soldiers, and captured another 132.

Medalcraft Mint was honored to have helped produce this commemorative medal in honor of Sgt. York in cooperation with Joel Iskowitz.

For more information about custom medal striking services from Medalcraft Mint or to request a quote, please go to https://medalcraft.com/ or call 800-558-6348.