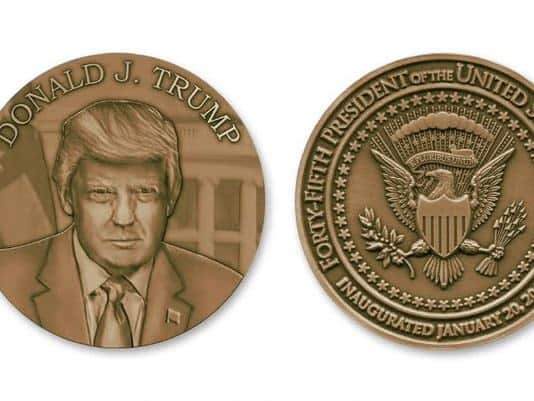 Trump selected Medalcraft Mint Inc.’s design for the 24-carat gold inaugural medallion, which will be presented to him in a private meeting Friday on Inauguration Day.

Jerry Moran, owner of Medalcraft Mint since 2007, said the design was one of five he submitted to Trump’s team after the election.

On the front, the winning design features a portrait of Trump with the White House in the background. On the back is the presidential seal displaying the inauguration date.

The company learned it has been selected late Wednesday and almost immediately began producing medallions for the inaugural ball and for distribution to campaign donors.

Medalcraft Mint, established in 1948, is no stranger to these kinds of high-profile events. The company also designed and produced inaugural medals for President Barack Obama and President George W. Bush, and has made medallions for the NFL’s Pro Bowl as well.

Moran said he and his staff had also designed potential medallions for Hillary Clinton in advance of the election.

In a sign of the contentiousness of the election, he said a few artists approached him offering to sculpt Clinton’s medal portrait but decided not to get involved after Trump won.

“It wasn’t a big deal,” Moran said. “We just made a few other calls and we found someone happy to do it.”

Moran said the company’s superior capabilities and quality of engraving and finishing set it apart from the competition.

“The hardest part about something like this trying to find your angle to get your design in front of the president, who will make that choice (about) a small part of a historic tradition that goes back to George Washington,” he said.

He said his company’s advantage was the Republican National Committee which, after considering the business’ reputation, sought out Medalcraft and encouraged the company to submit designs.

Medalcraft Mint will make up to 10,000 of the medallions for purchase, mainly in bronze.

“The Medal of Honor is a small token of appreciation we give to families who are willing to think about someone else at such a difficult time.”

Personalized coins deliver an extra benefit to your commemorative

A growing number of organizations are using personalized coins to amp up the energy surrounding employee recognition, celebrations, and events worthy of challenge coins.

Our opportunity: Reinforce a university’s standard of excellence

It has been a whirlwind of activity this past year for the University of Massachusetts (UMass) Chan Medical School in Worcester, and Medalcraft Mint has

Copyright © 2022 The Medalcraft Mint Inc. company and its licensors. All rights reserved. All trademarks and brands are property of their respective owners.